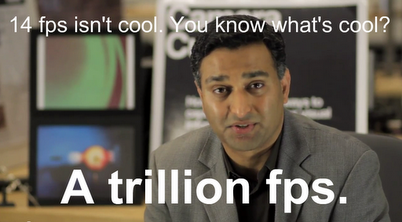 We have all seen the videos of Slow-mo guys and have awed over the ultra slow snaps of stuff getting burned/blown/shattered. Seriously, the shattering of a glowing light bulb and seeing it as it happens in ultra-slow-motion is very cool indeed, but the camera which MIT researchers recently came up with takes high frame per second photography to a whole new level.

I obviously cannot explain the new technology any better than those who have created it, so let’s hear it from them:

MIT researchers have built an ultra-super-fast-camera which can track a burst of light lighting up a scene and then fading away. The camera actually sees light moving but this is not your average point-and-shoot type camera, the whole thing costs upwards of US$250,000 and takes up a lot of space and the camera is able to capture only a very narrow image (one horizontal line in a whole image), so take actual pictures, the camera takes thousands/millions images of the same event happening over and over again and the lens assembly is moved a little bit each time to get the complete picture. Furthermore this limits this camera to events which can be easily and automatically repeated with precise timing. The camera also produces much noise in the output, but taking the image again and again gives enough data to get a proper reconstruction of the photons (light particles) moving in the scene.

However, further improvements in such a technology will definitely pave the way for improvements in imaging systems, fault detectors, and maybe just maybe, someday this type of speed will fall down to the average consumer camera.

Experiment Webpage:
Visualizing Photons in Motion at a Trillion Frames Per Second
(http://web.media.mit.edu/~raskar/trillionfps/)