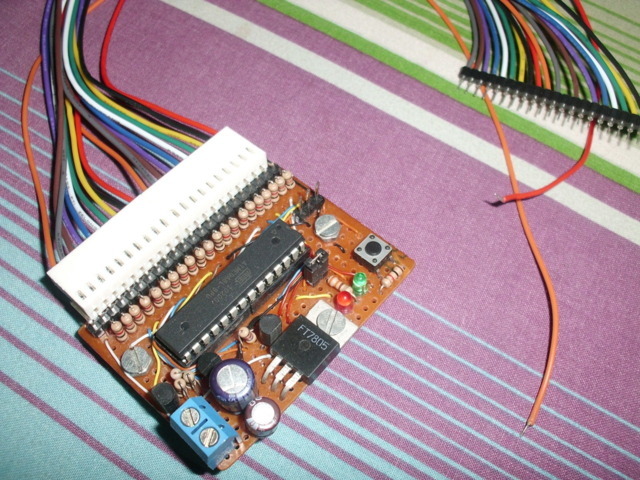 All the time working and learning on AVRs, I made a lot of mistakes, partly to not checking for the correct the voltages, not putting limiting resistors or shorting stuff out, etc. So, I got myself a lot of BAD/DEAD AVRs, some were completely DEAD, but some had a problem which prevented me from programming them, either they required some special CLOCK source or I had mistakenly disabled SPI, JTAG etc in the Fuse settings…

I found a great solution to my problems, AVR FUSE-BIT FIXER came to my rescue, I made the circuit and was happy that my AVRs would now get fixed but there was a problem, the PCB which I made for the FUSE-BIT FIXER had many problems. Plus I was running out of working AVRs so I took the stand and made the whole circuit on a VERO Board.

This is by far the most DENSE circuit I have made on a VERO-BOARD this small. Although this is not a complex circuit, but putting in so many components took so much time and effort, but in the end I managed to FIX 5 of my AVRs. YEAH :)

UPDATE: You don’t need to make such a dense circuit on proto-board. I am putting here the project files from the original maker.

One thought on “AVR Fuse-Bit Fixer”