Another day, another LED Matrix video. These 64 LED packs have got me fixed on them and I have been trying all sorts of stuff…

VIDEO AT THE END

I wanted a complete font set for the display so I set out to mak it myself but finally decided to copy the 5×7 dot-matrix-font which is used in alpha-numeric LCDs.

The task of converting all these characters into HEX code was taking a bit too much time, so I wrote a small tool in C# which generated these automatically from pattern made on a Checkbox grid and I ahd the complete set ready in no-time. the two different hex codes shown are for different alignment of display[I saved the other ones as I might need them later]. 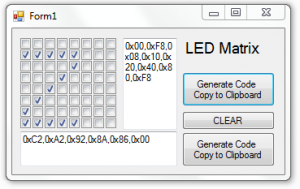 Here is a video showing alphabets and numbers Marqueeing along the display, though the camera shows flickering and reflections the display looks great in person.